Let’s be honest: the campaign has been on for so long I stopped paying attention. It’s far too late to catch up now so this campaign, instead I am going to review the home page of party websites. 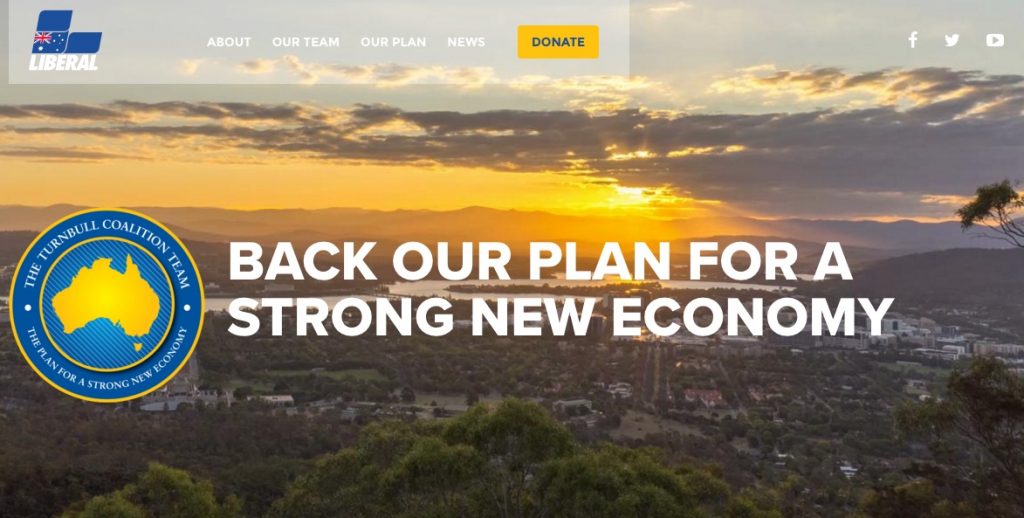 Let’s start by saying what everyone else has: it’s nice that they never change their logo. It’s there in the top left corner. It feels comfy, if a little seventies: a shout out to the Howard years. I don’t know if it was created in the Howard years because: research. I don’t want to know. I’m so tired already.

The other logo is confusing. Is this their campaign logo? I’m talking here about the map of Straya. I don’t like this logo. I don’t know why quite often the Liberals put yellow in their logo. Yellow is not a power colour. When is the last time you saw an ASX Top 50 CEO wearing yellow? Never. Donald Trump doesn’t wear yellow. Maybe gold. This is not gold; it’s yellow. Also the background behind Straya is sort of lazily striped. It looks lazy. Like the graphic designer phoned it in. Or more likely, the graphic designer wanted it plain and someone with no design nous whatsoever said, “Let’s jazz up that background a bit,” and the graphic designer sighed and wanted to die but they did it anyway because: clients. Anyway, the background looks unnecessarily complicated. Is this meant to imply Australia’s waters are complicated? Touch. I feel like this logo looks a little like those gold badges on wine bottles that upon closer inspection turn out to say something like, ‘Entered in the Sydney Wine Show 2015’.

Moving on, the Liberals want us to BACK [their] PLAN FOR A STRONG NEW ECONOMY. This seems presumptuous given we don’t know what the plan is. It is a secret plan in mode ofJosh Lyman’s secret plan to fight inflation. This makes me feel comfortable as we all know the only time Liberals ever told us an actual plan (ahem, John Hewson), they got beaten and had to wait another election to implement the plan when they said they wouldn’t (ahem, John Howard).

All is as it should be.

Finally, the photo: a new day is dawning on what I assume is Canberra. Or it could be a sunset. I guess time will tell. There is no picture of Malcolm just in case they change leaders again; they won’t have to redo the website. Future proofing is part of the new economy.

Labor has jushed its logo just a bit. I don’t know how to spell jushed. I hope you know what I mean. It’s just a tiny bit different. I hope they talked about that a lot and unveiled it somewhere at some stage. I like a good unveiling.

Labor’s slogan at least is descriptive and says what they plan to do. It feels like a relief that they’re going to put people first instead of the economy. Game on. It’s slogan death match and they actually match up. It’s good they chose, ‘people’ too, rather than say goats or hairstyles or fitness. I think that would have been a gaffe. Fitness is important though. (I hear).

Their sub-slogan is a bit less confident though, n’est-ce pas? “Standing up for middle class and working class people.” BOTH OF THEM. This comes straight from a research group which went like this.

Researcher: Who do you feel Labor stands for?

Someone from a marginal seat #1 (SFAMS#1): Well, they like unions.

Someone from a marginal seat #2 (SFAMS#2): I’m not sure they stand for me.

Researcher: At the end, after the questions.

SFAMS#5: Can I have a biscuit now?

SFAMS#1: I don’t think they like the middle class.

Labor has cunningly chosen to display its leader in its photo but oddly not with his family. Instead with a random woman and random children. Ahem. Let’s move on. The child on the left is totes cute but looks like she wants to ask Bill something. I wonder what? We will never know. Deal with that uncertainty. Adulthood is about how we deal with ambiguity.

Labor wants you to stand with us. This makes it sound like there are other people already there. This makes me feel comfortable.

The Nationals also want you to BACK [their] PLAN FOR A STRONG NEW ECONOMY. Whose plan is it? Yours or Malcolm’s. Well, exactly.

The Nationals couldn’t choose just one photo; they have a whole bunch of photos of Straya. They are so dynamic and happening. Or indecisive. I can’t decide. Perhaps indecisiveness is catching.

The first thing that happens when you get to their website is a popup that shows you Barnaby’s face and asks you to donate. This seems brave.

The Nationals don’t have a favicon for their website. This feels indolent to me.

This website took too long to load and I nearly gave up. Technology is so evil and carbon emitting.

The Greens’ website scrolls through a bunch of different slides some of which bang into the navigation menu because accommodating a collective view takes website real estate. Finally, you will see a slide that says:

This election is about taking strong action on global warming, using clean energy to power the new economy, tackling inequality and having a more compassionate approach to people seeking asylum.

So many thoughts on this:

I don’t know who the people in the leis are in the photo but good on them for taking a chance.